After a much longer delay that I expected, I am back to blogging on a regular basis. Today I want to discuss a common topic among clinical pharmacologists. How do you properly design a drug-drug interaction study?

While these studies may appear complicated, they can be simplified very quickly to make the study design straightforward. In all cases, there are 2 drugs involved in a drug-drug interaction study, and they always interact in the same way. One drug is considered the probe substrate, and the other is the interacting drug. The probe substrate is metabolized or transported by the biological enzyme being studied (e.g. cytochrome P450 3A4, OATP1, etc.). The interacting drug affects the biological enzyme being studied by either inhibition or stimulation. This can be illustrated as shown below: 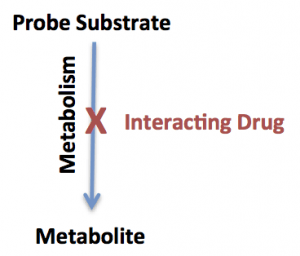 To make the example more specific, let’s assume you are evaluating the potential for a candidate drug to inhibit cytochrome P450 3A4. This would make the candidate drug the “interacting drug” (shown in red text) and you would select a probe substrate that is sensitive to changes in CYP3A4 activity (e.g. midazolam). A second example might be the evaluation of inhibition of CYP2C8 on the metabolism of a candidate drug. In this second example, the candidate drug would be the probe substrate (shown in black text), and you would select an interacting drug that is a strong inhibitor of CYP2C8 (e.g. gemfibrozil).

The first step to designing the correct study is to draw an image like the one shown above and list the names of the probe substrate and the interacting drug. In addition, you will need to identify if the interacting drug is expected to inhibit or stimulate the metabolism (or transport) process.Before we move to study design, let’s consider the analysis that needs to be conducted at the end of the study.

The basic study involves evaluating the clearance of the probe substrate under two conditions:

Now that we have the basics, we can design the study. We need to administer two separate treatments to each subject. Since we are testing a biological enzyme that is thought to be free from influence of the study subject, blinding is not necessary in these studies. Since it is an open label study, a fixed sequence design is the easiest to conduct. In this design, a subject receives treatment 1 (probe substrate alone) in the first period, followed by an appropriate washout. Then the same subject receives treatment 2 (probe substrate + interacting drug) in the second period. By comparing period 2 (Test) to period 1 (Reference) you can determine the effect of the interacting drug.

Easy right! … Well there are some additional considerations that may affect your study design.

This should give you a good idea of how to design clinical drug-drug interaction studies for anything you encounter.

Cancer treatments often use regimens of multiple drugs being administered simultaneously, thus raising their potential for DDIs. Indeed, DDIs that cause unmanageable, severe adverse effects have led to restrictions in clinical use and even drug withdrawals from the market. Read this case study to learn how pharmacometrics was used to assess the risk of a DDI for a new combination cancer treatment.