Nearly half of drug candidates fail because of inadequate safety in pre-clinical testing, representing an expensive loss of investment and lost opportunity. Often, drugs are found to cause toxicity through off-target activity. Therefore, understanding how drugs interact with their target receptors, and minimizing off-target activity is crucial to developing effective medications. Over my career, I’ve been developing CADD (computer aided drug design) approaches to help drug development scientists find novel, safe candidates more quickly and easily.
In order to address the limitations of classical QSAR, I invented the first 3D-QSAR method, CoMFA, (comparative molecular field analysis) in 1988. This method allows researchers to build statistical and graphical models that relate the chemical and biological properties of molecules to their 3D structures and the 3D steric and electrostatic properties. These models were used to predict the activity of novel compounds and the information helped researchers to decide which molecules would likely make the best new drug candidates.

But, I found that I wanted to help researchers generate 3D-QSAR models faster, so my next project was developing Topomer CoMFA. This method enabled researchers to create 3D-QSAR models in minutes instead of weeks, and to automatically generate 100’s to 1000’s of predictive QSAR models for chemogenomic studies by mining large databases of chemical and biological data. Because pose generation was automated with Topomer CoMFA, researchers could easily generate models for multiple activities and identify novel ideas for R-groups that led to improvements in activity using virtual screening based on predictions from 3D-QSAR models. 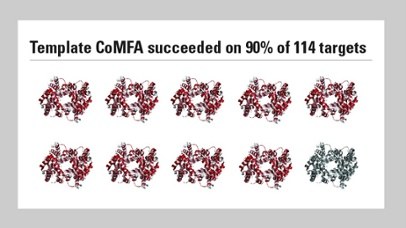 Still not satisfied with existing molecular alignment methods, I started thinking about a new method that would address this problem. So, I built on the innovation in the topomer CoMFA method to develop template CoMFA. This is a novel alignment methodology for training or test set structures in 3D-QSAR. And I’m seeing some great advantages—its complete automation and its ability to derive a single combined model from multiple structural series affecting a biological target. Its only two inputs are one or more 3D “template” structures, as may result from X-ray crystallography, and one or more connectivity-only SAR tables associated with a common target. Template CoMFA overcomes the major disadvantages of both existing 3D-QSAR alignment methodologies, specifically the tedium and subjectivity of familiar ad hoc approaches, and the awkwardness, occasional physicochemical heresies, and structural scope limitations of the purely topomer approach. Most important of all, template CoMFA models are providing impressive predictivity over completely unprecedented varieties of chemical structures and biological targets. The elusive promise of 3D-QSAR approaches seems to become real with template CoMFA.

It’s been a great journey. If you didn’t happen to make it to ACS or EuroQSAR, I’ve included my presentation here. Could template CoMFA change your approach to drug discovery? Let us know what you think. Let’s begin a dialog.

To learn more about how to systematically leverage the many benefits of M&S across a drug development program, read this white paper.

Home / Solving Molecular Discovery Problems with CoMFA over the Years