Viral dynamics: What is it, and why model it?

Viral dynamics (a.k.a. viral kinetics) refers to the mathematical description of the interaction of the virus and its target cells over time. One of the most important measures of viral dynamics is the basic reproductive ratio, R0: the number of cases that one infected cell, or person, generates on average in an otherwise uninfected population. An infection can spread within a population only if R0 > 1.  For example, measles is transmitted through the air and is one of the most highly infectious viruses with an R0 (at the level of people, not cells) between 12 and 18. By contrast, HIV is transmitted via blood or sexual contact and is much less infectious with an R0 of 2-5, though higher at the level of cells. 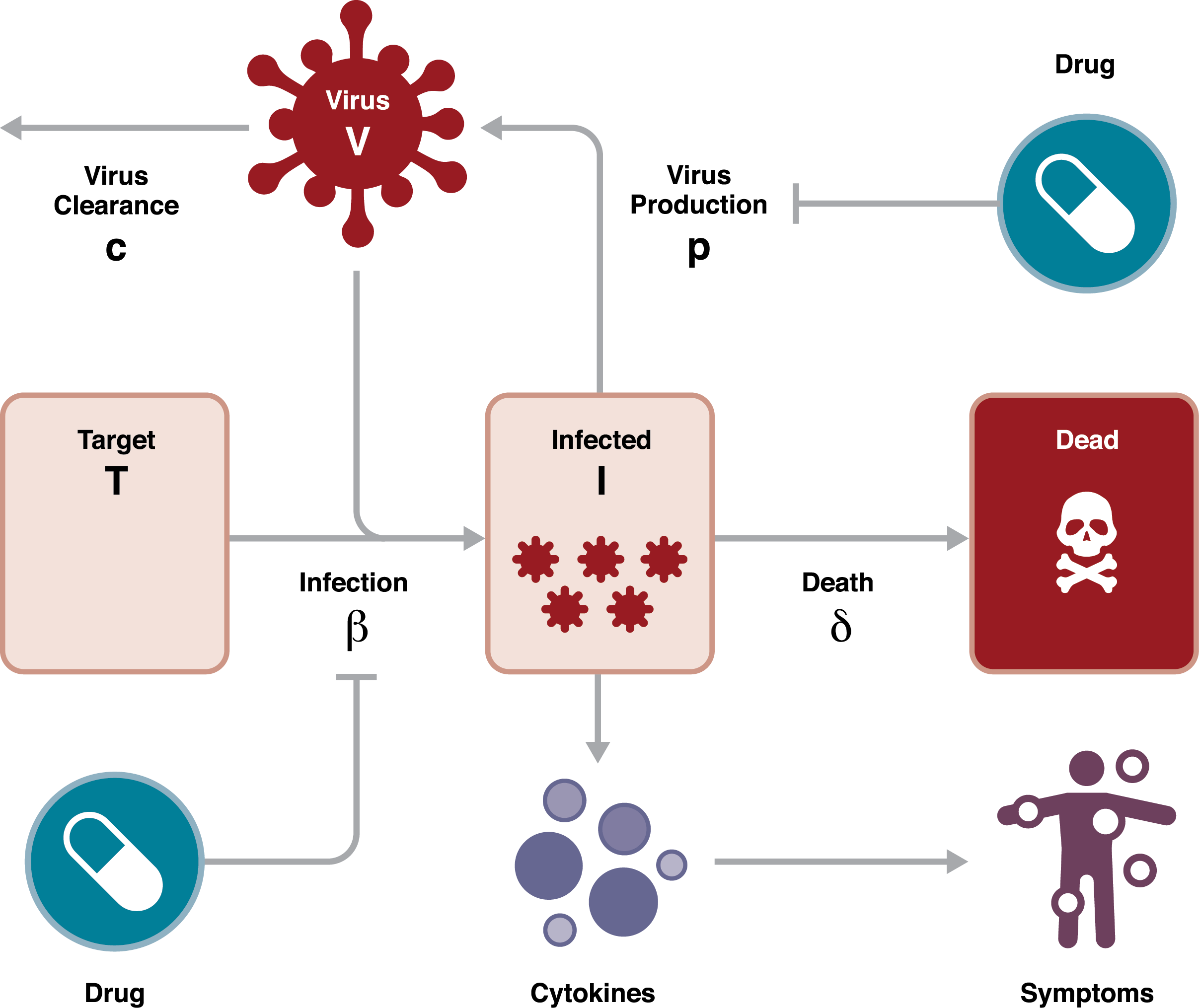 This basic viral dynamic framework, with disease-specific extensions, can be used to model many viral infections including hepatitis B and C, HIV, and cytomegalovirus (CMV). And, we can elaborate on this framework to address additional questions: What is the effect of combination treatments? How do drug-resistant viral strains emerge under the selective pressure of treatment? What is the impact of adherence— missed or late doses— on the emergence of resistant viruses? How does the immune system respond to clear the infection? And, for curable infections like HCV, what is the viral load threshold for cure?

An integrated approach to performing modeling and simulation can be used to address all of these questions. 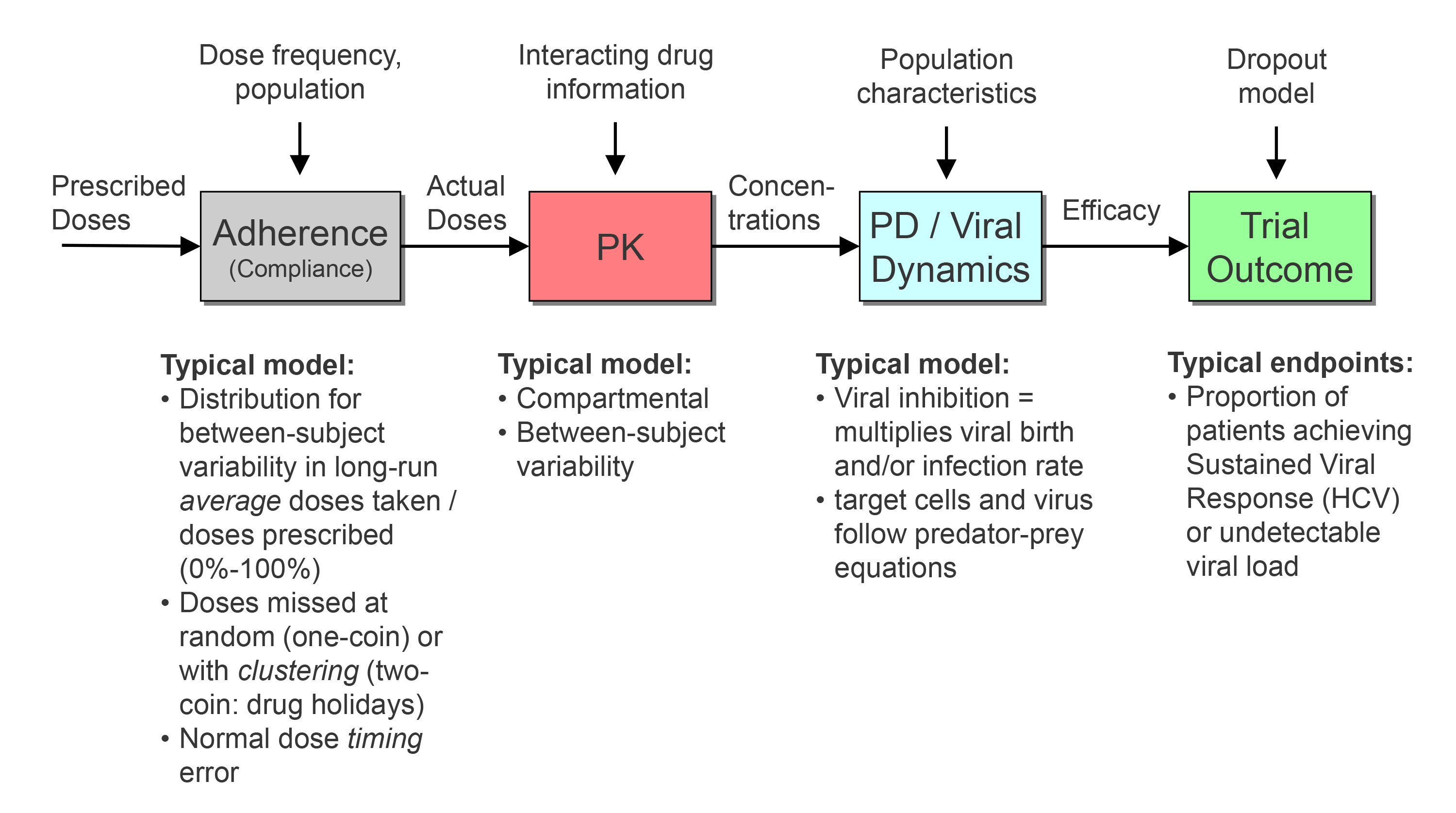 On the left of Figure 2, prescribed antiviral doses enter an adherence model, and actual doses come out.  Next, the PK model translates actual doses to drug concentrations over time for each patient. Typically, these are compartmental models with between-subject and within-subject variability. Antiviral drug concentrations then drive viral inhibition and alter viral dynamics. Finally we simulate many virtual patients representing a population to predict the proportion achieving trial endpoints such as a sustained virologic response or undetectable viral load. We can also model the impact of patients dropping out of the study on the probability of trial success. And that could even be modeled together with adherence recognizing that adverse events tend to increase dropouts and decrease adherence.

In a perfect world, patients take every prescribed dose on time. Of course, in reality, non-adherence is common and contributes to therapeutic and trial failure. Figure 3 shows an example of adherence to a drug that’s to be taken three times a day. For this patient, the overall adherence is only 53 percent.  The missed doses aren’t randomly distributed but are sometimes clustered into drug holidays. The figure also shows a double headed arrow illustrating dose timing error—when the patient takes their medication, but not at the same time each day.

In Trial Simulator, users can assess the impact of both missed doses and dose timing error, which can be set up as a normal or any continuous distribution. Missed doses can be set up to apply to all drugs in the regimen rather than to each drug independently. In addition, users can set up population-level variability in adherence, i.e., some patients consistently take all their doses while others don’t. 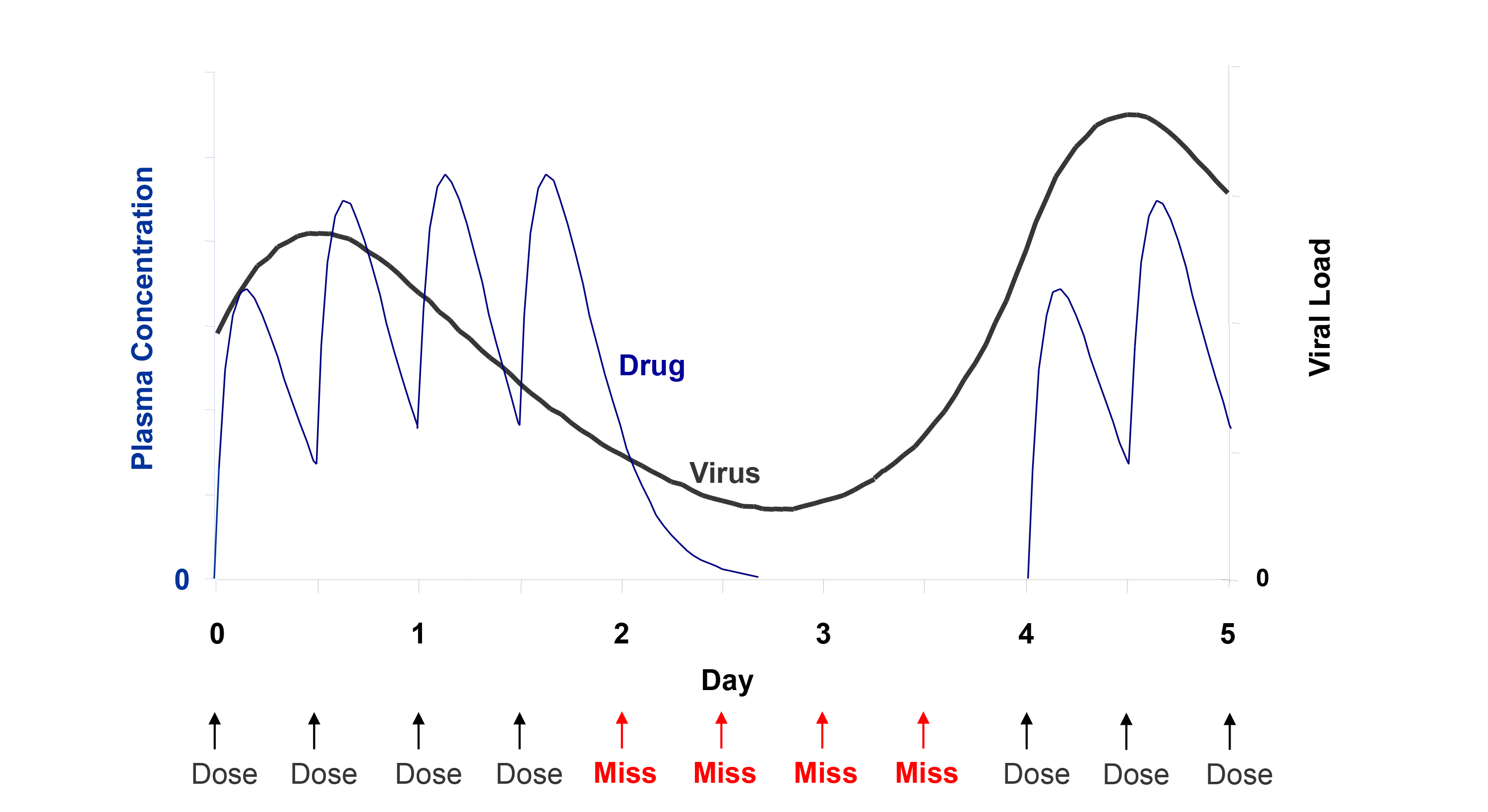 In summary, basic viral dynamics is similar across many viral diseases. For this reason, users can build viral dynamics models integrated with PK, adherence, and trial design to perform simulations that help assess the impact of each of these factors. Certara’s Trial Simulator software is designed to help users build and use these models to support better decision making in antiviral drug development.