Pharmacology to the payer (P2P) is an innovative approach to create a framework for dialogue between drug sponsors, regulators, and payers. The core structure is the sequential linking of quantitative mathematical models—pharmacology, pharmacokinetics/pharmacodynamics (PK/PD), disease progression, epidemiology, health utilization, and health economics. In this blog post, we discuss how working with an amazing team of innovative thinkers, we planned and implemented a P2P framework for oseltamivir to inform pandemic influenza planning.

The philosophy of P2P is to take each of these components that were considered as individual units in drug development and link them together. Experts who work in any of these components recognize that within their domain, their models are complex and multifaceted. Therefore, connecting these complex systems was a major challenge for us. To achieve linking, we stripped down each of the models to their most essential states. This curation enabled the most critical information to flow between the components.

We then brought in domain experts to evaluate and refine these components. Once the components were deemed acceptable, we joined them to produce a standard, single connected mathematical framework spanning this basic pharmacology to the payer.

The test case for P2P

The New York Times reported in January that this flu season is the worst in nearly a decade. So, thoughtful pandemic planning is urgently needed.

Most sophisticated epidemiology influenza models don’t consider the basic features of antiviral pharmacology. Indeed, they treat antiviral pharmacology as an “on/off switch.” In this approach, if you get antiviral treatment, you have 100 percent efficacy. If you don’t get it, you don’t. In reality, antiviral efficacy varies significantly from patient to patient within the treated population. The P2P framework accounts for this variability in pharmacological responses.

Furthermore, this approach can inform decision-making for new antiviral candidates. For example, it can help optimize the timing and dosing strategies for combining a new drug regimen with the standard of care, oseltamivir. Thus, quantitative models can assist with overcoming the uncertainty of drug development and aid pandemic forecasting.

We had two objectives for this P2P test case. First, we wanted to develop this quantitative framework, which linked oseltamivir pharmacology, with the PK (drug exposure) to the PD (viral shedding) to an influenza disease progression model, to epidemiology and health economics. Second, we wanted to assess the impact of different oseltamivir uptake and dosing on the burden of influenza spread and its health utilization under various pandemic scenarios.

Now, we briefly discuss the models that comprise the P2P framework. The framework was underpinned by the significant body of work describing the pharmacology of oseltamivir and the series of quantitative PK models from early in drug development, which described the variability in PK between patients. The first model was a previously published oseltamivir population PK model describing PK in healthy volunteers. We chose this population because they have the highest renal function. Therefore, they will have the lowest exposure to oseltamivir. This is the worst case scenario. Every other patient group has lower clearance, and therefore their exposure will be higher.

We then used a previously published PK/PD model of oseltamivir on viral shedding. The data used to build this model came from a human challenge study. We built the third model—a stochastic compartmental epidemiological model—and then evaluated it against a previous flu season. Lastly, we built a health economic model from literature data and then evaluated its performance.

Visually, this is what P2P looks like. Our pharmacology model links to PK/PD. This model shows the percentage of patients that’s exposed or not exposed to a certain amount of drug.

We then link to our disease progression epidemiological model, which shows how exposed patients progress through the SEIR phases and the impacts of various treatment scenarios. 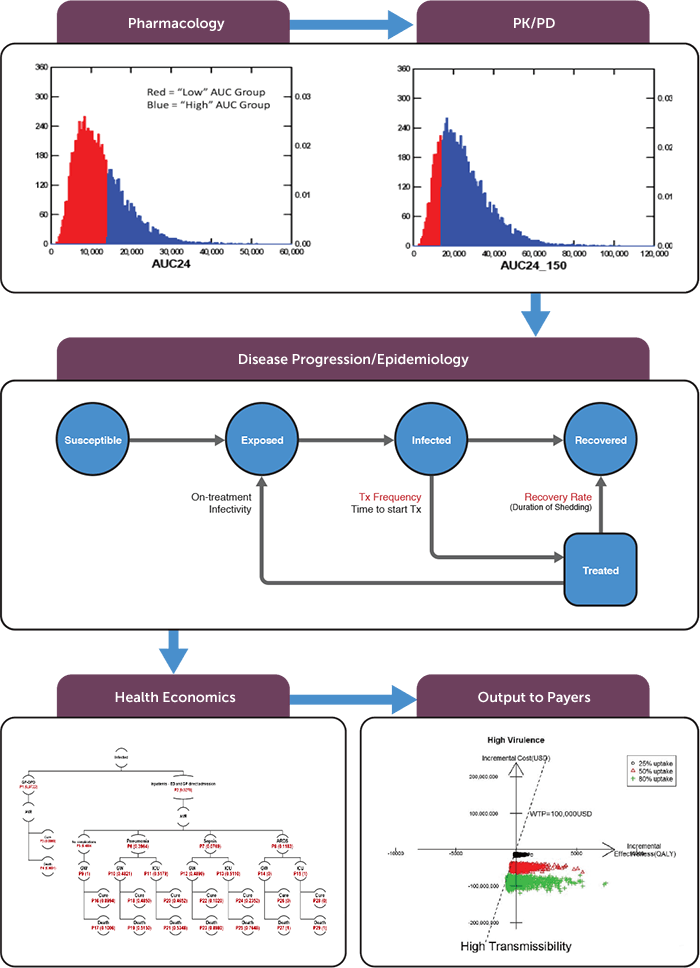 The information then flows to a health economic model, which predicts the probabilities and the costs for various health outcomes. Output from the health economic model allows us to understand the impact of various treatment strategies from a payer or public health perspective.

We started with a population PK model, which we used to simulate PK parameters for 5,000 virtual patients. These patients received either 75 or 150 mg oseltamivir twice daily for five days. For each patient, we calculated their exposure (AUC).

We then compared that exposure against the human challenge model data, which indicated when viral shedding ceased. And it was found that the higher the oseltamivir exposure, the shorter duration of viral shedding.

From that work, we determined the proportion of patients achieving this PK/PD target to reduce viral shedding. We then utilized that to construct the density distribution of the population fraction that achieved this target attainment.

So we were comfortable with this described variability, but could it describe an actual pandemic? We used influenza epidemic data from the Midwestern United States across the 2007 to 2008 period, and we took that model and fitted the data. While the simulated influenza season does miss the peak of fraction of the population infected slightly, the area under the curves is comparable. So, we were confident that our model could describe a flu season adequately and could be used for simulating potential pandemic scenarios

The SEIR epidemiological model allows assessing what flu seasons could look like depending on the transmissibility of the virus, the percentage of the infected population treated (0, 25, 50, and 80%), and the dosage of oseltamivir used (low dose, high dose, or no treatment). We evaluated two possible attack rates. The modest attack rate of 370/1000 infected has an Ro of 1.9. So, each infected patient will infect, on average, another 1.9 patients. The higher attack rate was set to 670/1000 or an Ro of 2.7.

The transmission rate parameters were adjusted to achieve the requisite attack rate and evaluated against previous flu season data. For each scenario, 1000 Monte Carlo simulations (flu seasons) were conducted to determine the median attack rate.

In the moderate transmissibility scenario, no treatment results in about 37,000 patients infected per population of 100,000. With 25% of the population treated at the 75 mg BID dose, we can decrease the number of infections dramatically to about 5,000 per 100,000. Increasing the percentage of the population treated only results in slight additional decreases in infections. Likewise, increasing the dose to 150 mg BID doesn’t change the number of infected patients markedly.

Median number of infected individuals per population of 100,000 by % treated and oseltamivir dose regimen

The outputs from the SEIR model were input into our health economic decision analytic model. The patients enter this model as either inpatients or outpatients. If they enter a hospital, they can enter as general medical or can end up in the ICU with the appropriate disease severity. Standard flu-related complications include pneumonia, sepsis, and acute respiratory distress syndrome.

Our cost utility analysis—in US dollars—considered both payer and societal perspectives. All our data inputs were based on US data and literature. Our model also included several assumptions. We assumed that all patients started the therapy within 24 hours of diagnosis, that all treated patients were 100% adherent, and that patients could not get re-infected. Once we built the model, we evaluated model robustness using one-way multivariate probabilistic sensitivity analysis.

A decision tree came out of that work with associated probabilities. Infected patients enter the decision tree with two probabilities. They can either go to a general practitioner (GP)/primary care clinician where they get antiviral therapy. With treatment, most get cured, but a very small percentage die. If they become inpatients through an emergency department or through GP direct admission, they then get antiviral therapy, and continue through a series of steps for no complications, pneumonia, sepsis, acute respiratory distress, and all the possible probabilities that follow.

Effect of oseltamivir dose and uptake on health economic measures

Consider an influenza season characterized by low virulence and low transmissibility. We compared the cost to payers and society for treating 25, 50, and 80% of the population with both doses of oseltamivir as well as no treatment. Both the 75 mg dose vs. no treatment and the 150 mg dose vs. no treatment are cost savings for both payers and society. But, when we compare 150 mg versus 75 mg, treating patients at the higher dose is not cost effective compared to the lower dose.

In the high virulence, high transmissibility state, both dosing levels are cost effective at all uptake levels when compared against the no treatment option. Furthermore, 150 mg vs. 75 mg also is cost effective for the payer and societal perspective for all degrees of uptake. Thus, we can use this information to develop a decision planner for the dose to use and the percentage of the population to treat in differing infectivity and virulence scenarios.

We hope that you’re now convinced that integrating pharmacology, PK/PD, epidemiology, and health economic models is achievable. We can use this approach to optimize treatment, not only at a patient level, but also to understand the indirect benefits of reducing societal flu burden. Such approaches can inform containment strategies and aid evaluating the potential impact of other antivirals.

While further model refinement is required to represent reality, the current study has generated useful insights to supporting pandemic planning. Limitations to be addressed include:

This approach could be undertaken for other diseases. Any chronic disease with a known sensitive biomarker that correlates with long term outcomes could be used. For other diseases, we’d replace the SEIR model with a biomarker-disease progression model. While this could be accomplished, it would require time and thought.

The agent-based epidemiological model can also be used to predict how different antiviral uptake and dosing levels would affect the spread of a pandemic across a nation.

This video depicts a global simulation of an influenza pandemic; the US is depicted at the county level as well as 15 global cities. Two scenarios are compared: no treatment versus 75 mg BID with 25% uptake by symptomatic infectious patients. The model pandemic is seeded by a patient arriving in the US from Asia with a seminal case of flu and infecting new patients. It utilizes US census data for commuter traffic, US Department of Transportation data for domestic air travel, and international air travel data. As you can see from the video, 25% uptake of oseltamivir can significantly reduce the number of patients infected.

Should you be interested in learning more about how we developed the P2P framework, watch our webinar. We hope that you’ll let us know what you think in the comments section!

Home / How to Plan and Implement a Pharmacology to Payer Framework