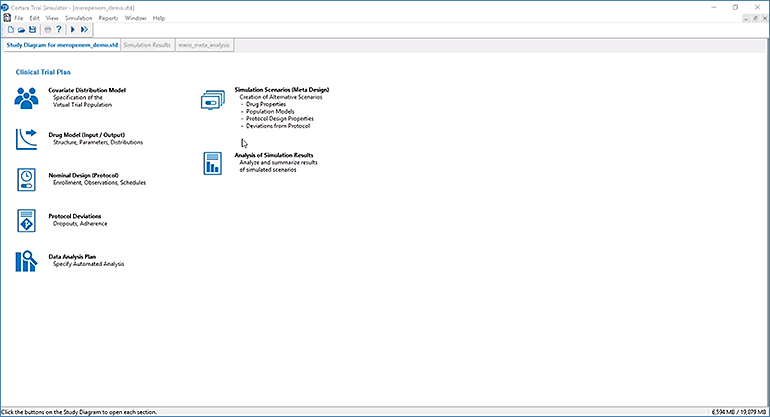 This is the main dashboard for Trial Simulator. Its icons are arranged in an order that make sense as you’re thinking about conducting a clinical trial simulation.

For covariate distribution, specify the individual patient characteristics (parameters such as age, body weight, gender, etc.) to be available to the drug model. While I can use parametric simulation for covariate distributions, it’s generally better to use real world data because it preserves the inherent correlations between characteristics like body weight, age, gender, etc.

Developing the drug and disease models

Now that we’ve specified the characteristics of our patient population, let’s talk about the drug and disease model. This is the model specification workbench that Trial Simulator uses; I’ve grouped the model components into two categories. 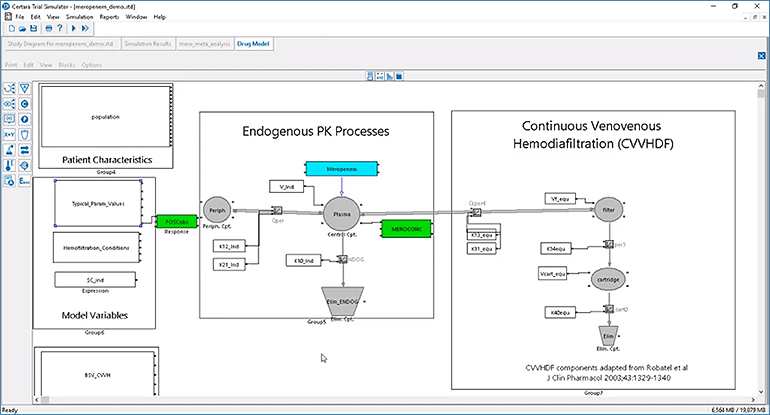 On the left are the variables that the model will pull in and use as needed. These variables can be from the literature or user-specified. The middle block describes endogenous pharmacokinetic (PK) processes including the dosing of the antibiotic, meropenem, into the central compartment via IV administration. This two-compartment model has between subject variability on all parameters. The model includes some natural elimination of drug. But, patients with sepsis often experience renal impairment. So on the right are the model parameters and processes associated with CRRT.

One way that Trial Simulator helps users build their models is the drug model debug window. 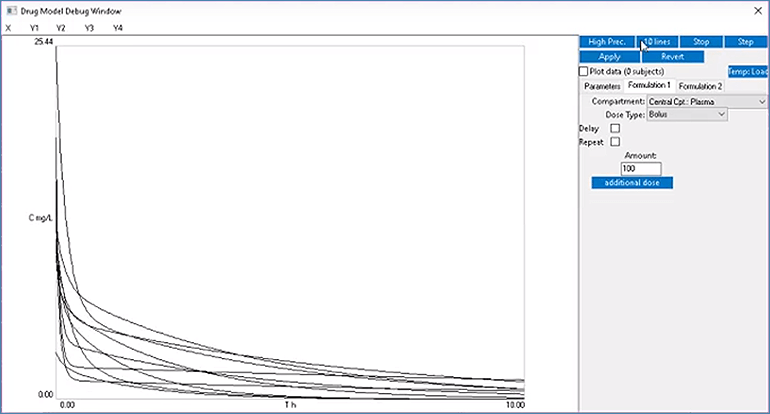 For instance, if I want to check that I’ve specified my model correctly, I can provide a dose to the model’s central compartment. The debug window then generates the plasma drug concentration-time profiles for up to 50 individual virtual subjects. This visual aid lets me see how variable the simulated profiles are and detect any behaviors that may indicate model misspecification.

Now that we’ve specified our drug and disease model and our trial population, we will consider our trial design. 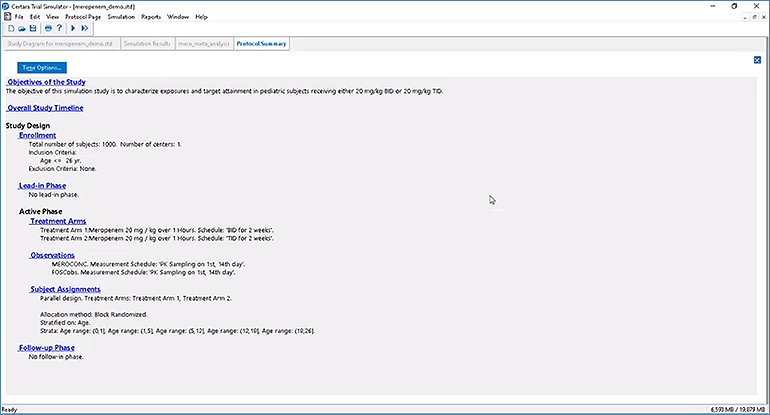 The interface for specifying the virtual trial design is similar to a clinical trial outline including the study objective, timeline, and design.  For the study’s enrollment, we’re simulating large cohorts of subjects to make recommendations for the population as a whole. We’re not necessarily evaluating the probability of trial success. If we were, we‘d match the number of subjects to the intended design for the trial. And we could even explore the sensitivity of trial outcomes to varying the number of subjects.

The study timeline contains information pertaining to dose administration and sampling of endpoints. In this case, drug administration is either twice (BID) or three times (TID) daily. On day seven, PK samples to measure meropenem concentrations are taken. The study timeline also includes a fluid overload variable as subjects undergoing CRRT often retain water. Fluid overload impacts the drug’s volume of distribution. By including this variable, we can explore the potential impact of increasingly severe states of fluid retention on PK.

In addition to the overall study timeline, we can specify the trial’s treatment arms. Trial Simulator supports scaling the amount of drug administered by covariates, adjusting dosing using a covariate dose adjustment table, or adjusting dosing based on response values. For instance, if the trial was studying a diabetes drug, I could titrate the dose based on subjects’ fasting plasma glucose.

Trial Simulator can analyze the data from a simulated trial using descriptive statistics, ANOVA/ANCOVA, or a custom analysis in R. For instance, I developed an R script that computes the target attainment rate for subjects based on their meropenem concentrations. One of the most powerful aspects of trial simulation is that you can test multiple scenarios with regard to your assumptions, the drug and disease model, and aspects of the trial design.

Here is a plot showing the target attainment rates for four different degrees of fluid retention for patients in each age group. Within each age group, we have the two treatment schedules and the two targets: 40% (P40) and 75% (P75) of the dosing interval has a plasma drug concentration above the minimum inhibitory concentration (MIC). 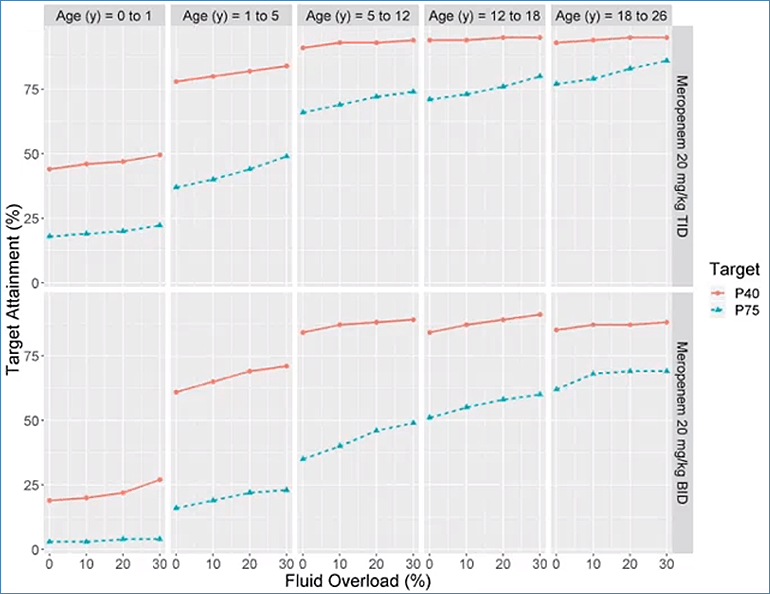 The top row of plots are for TID administration for meropenem while the bottom row is for BID dosing. The columns are the various age categories. For ages five and up, the subjects show high rates of target attainment, especially for the TID administration and the P40 target. But for younger age groups, particularly for the BID administration, attainment rates are markedly lower. Thus, we can conclude that for younger patients, we likely need to give higher doses to achieve adequate drug exposure.

To learn how to implement this type of analysis in Trial Simulator, please watch this webinar.